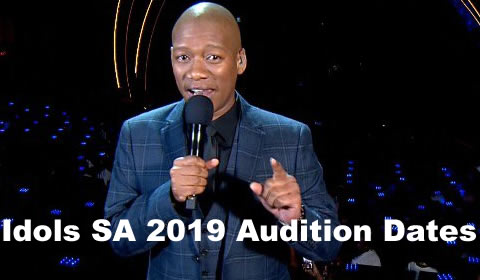 Idols SA 2019 audition dates have been confirmed and revealed.

Ready to be the next big music star? Here’s where you can audition for Idols SA.

Have a voice of gold? Are you destined to be a star? Is singing what you live and breathe? Well then here is the opportunity of a lifetime! Join history-makers like Paxton, Noma, Karabo and Khaya Mthethwa to be the next great musician Mzansi has seen by entering the auditions for Idols SA Season 15.

The auditions will be criss-crossing South Africa in search of the velvet vocals of our next Idols and chances are that could be you! So take a look at the audition schedule below and get ready to show us what you got!

What time should I get to auditions and what should I bring?

The queues are often long, so get there early. Registration will open at 8am. Bring your ID or proof of identification, some water to keep hydrated, food and a song that suits your voice.

Who is allowed to audition for Idols?

Anyone who is a South African citizen between the ages of 16 and 30 may enter Idols. Minors must have written consent signed by a parent or guardian. Singers who auditioned in previous seasons are allowed to re-enter, but not anyone from a previous Top 10.

When does Idols Season 15 start and end?

Idols SA Season 15 premiere will be announced soon. Look out for more information on our platforms.

Where will Idols SA be screened?

Idols Season 15 will be screened in HD on Mzansi Magic, Channel 161 on DStv, every Sunday.

There will also be a dedicated Idols channel, (Idols Extra) Channel 199 on DStv.

The show will also be available on DStv Catch Up once the show has aired.

I auditioned for Idols this year. Will I be able to see my audition?

All auditions that make it to the judges round will be screened on Idols Extra, Channel 199 on DStv and will also be available on idolssa.tv

Where will the live shows be filmed?

When does voting open?

Voting will open during live shows at the Top 16 phase of the competition, after Theatre Week.

How would I be able to vote?

All voting details will be communicated in the first Top 16 show and the terms and conditions will then be made available on the Idols SA website – www.idolssa.tv

What is the prize package for Idols this year?

The full prize package is still to be confirmed, but the winner will win a recording contract amongst other big prizes.