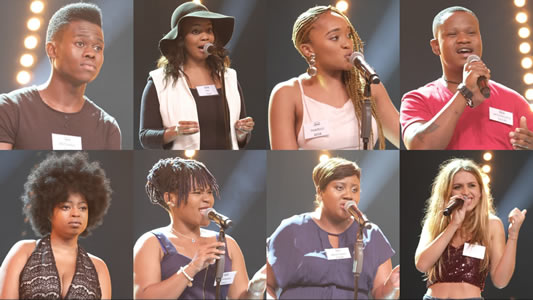 The second group of Idols SA 2017 top 16 took to the stage to perform for their spot in the top 10. Working closely with the contestants, in-house mentor Donald promised a spectacular show, but not all was hunky dory.

The opening was dynamic with a powerful group rendition of Lauren Hill’s  ‘Doo Wop/ That Thing’. It included vernacular rapping and singing.

Similar to last week’s theme, the eight contestants performed the breakout hits of their favourite artists for their solo performances.

First on stage, 22-year-old Minehle ‘Minnie‘ Ntuli set the bar high with her rendition of Vulindlela by the late Mabrrr.

Randall reckons that Minnie’s personality will set her apart from the other girls.

Unathi added: “I think you were very smart in how you approached the song, because as much as you danced and entertained us, you made sure that it was a very rich performance.

“Especially in the beginning. I have never heard Vunlindlela sung in such a soulful way…very well done tonight,” she said.

Returning to the judging panel from his LA voyage, Somgaga gave Minnie his first Woo Shem praise for her performance.

Botlhale Phora’s “I can’t feel my face” performance by The Weekend earned him mixed reactions from two of the three judges – regardless of the wild cheers from the crowd.

Unathi felt Botlhale understood the three parts of a song which meant he paid attention to Donald’s coaching. “I also loved your ad-libs because it took you away from singing The Weekend song and reminded us of who you are in terms of the the freedom that you had. It was very reminiscent of a young Micheal Jackson. I say very well done.”

Somizi didn’t connect with Bothlale and felt that the standard was that of a beauty pageant performance, while Randall felt he could have done better.

Things didn’t go so well for Nokuthula ‘Hadassah’ Makhoba (23) whose attempt at scatting to Jill Scotts “Golden” didn’t go down well with Somizi. “Scatting is for masterminds and goes with experience most of the time. And when you scat, don’t think you are going to fool us when you do it with the same notes,” he said.

Randall agreed, saying her performance was not the best. “I honestly couldn’t wait for it to end. I was really hoping that the guy at the mixing desk would turn you down and turn the backing vocalists up,” he said. He further went on to predict that he doesn’t see her making the top 10 cut.

Another person facing the chop is Gabi ‘Gabisile’ Du Plessis. Somizi said the 16-year-old’s attempt at Tori Kelly’s “Nobody Love” was off-key.

“Unfortunatey, for me it went south in everyway. It was off key. You are in danger. This is the time where you take your bible, your mphepho (incense) and pray that your fans be loyal. It wasn’t good for me.”

Randall again agreed that the singing wasn’t great but has a funny feeling that the personality will probably get her through.

Basetsana Kolwane (19) sang Zahara’s “Umthwalo”, which Somizi found “flawless”. “Witchcraft would be me criticising you when there is nothing to criticise. You were flawless. Beautiful.”

Randall did not agree, saying that the singer started off “tedious and in the end you got going. But you’ve got to have a look on your face… that the audience can connect with,” he said.

Unathi saw underlying pain in her performance because of tensions within her family.

READ: Idols SA’s Gugu Zulu – ‘Mom was my only supporter till recently,’

“Please be okay with the fact that your father does not approve with your dream,” she pleaded and likened her to singer Brenda Mtambo. “Live in the moment. Be great, rise to the moment. You were brilliant tonight.”

“Your father will eventually come around. After tonight, I don’t see why he shouldn’t – respectfully so,” said Unathi.

The title for the performance of the night from judge Unathi went to Mthokozisi Ndaba (25) for his rendition of Joe’s “I wanna know”.

Unathi asked for some more for her own pleasure, which had her in screams.

Randall added: “I don’t think last week and this week we’ve had a better combination of singer and song. I think the song worked for you in every possible way and, similarly, I think you did your best and your best is better than a lot of other contestants tonight.” Mthokozisi continued to be the standard which the remaining contestants were compared to.

But Thapelo Esau (20), who is a returning contestant, more than met the challenge with her rendition of Tamar’s “Love and War”, which impressed Randall.

“I think Mthokozisi and yourself are going to see more of each other and I would reckon that the two of you are going to around for a while.”

Unathi who gave her the golden disc to push her through said she was proud of her. “It built like samp steaming in a pot and by the time it hit that long note, I was so happy with your performance. I am so proud of you.”

Nomthandazo ‘Tee’ Xaba gave the closing performance and, like she has done before, gave a grand performance that impressed the judges.

The 18 year old’s rendition of Kelly Khumalo’s “Qinisela” was amazing. All the judges were impressed with her performance and Randall said her closing the show was a blessing because people will remember her and vote.

“I thought it was a good, solid performance. And I also think you will probably make it in the next round. But I do think that the two performers before you (Mthokozisi and Thapelo)… you are going to have a tough time.”

This coming Sunday, the top 8 with the most votes will automatically make it to the top 10, with the remaining two contestants chosen by the judges.