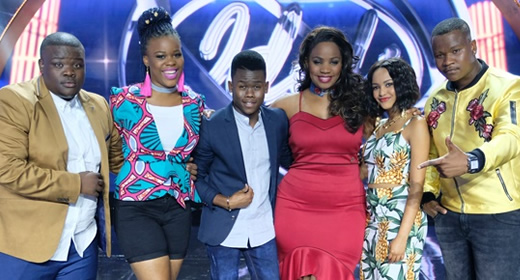 The Class of Idols SA Season 13 were put through their vocal paces when they performed two songs for the first time this season.With elimination hovering over them in the contestant lounge, host Proverb finally announced the safe six at the half way mark – and the name called was Christo. The performer from Port Elizabeth did not receive enough votes to keep him in the competition.

The contestants had to honour two themes: How It Should Have Been Done, where they took a Wooden Mic contestant song and gave their best rendition of it; and Love Back, where they performed popular love songs.

1. Mthokozisi opened the show with Ringo’s Kum Nakum, which got him a standing ovation from two of the judges. His second track, Incomplete by Sisqo, had Randall shaking his head appreciatively. “You look like you’ve already won. You are ready,” he told him.

2. Phindy followed with Whitney Houston’s iconic I Will Always Love You, and later switched to an up-tempo pop tune with Ariana Grande’s Focus. Her reviews were lukewarm, with Unathi failing to connect and Randall feeling she has forgotten that she’s part of a competition.

3. Also safe was Lindo, who performed Ndenzenjani by Nathi followed by R. Kelly’s Step In The Name of Love. The feedback from judges was consistent to the other weeks; Unathi loved his “sweet and pure” voice and Randall reiterated that people like him.

4. Botlhale continued his dynamite performances when he sang Lira’s Feel Good and Let Me Love You by Mario. “Finally, we have three guys with really good warm voices! The girls have better be careful,” enthused Randall. Unathi commended him on his “perfect” song choices, and Somizi agreed.

5. Another Nathi classic, Nomvula, was given treatment by Faith, who followed it up with No One by Alicia Keys. “It feels like you are distracted,” was Unathi’s disappointed verdict. Randall thought her voice was undoubtedly good, but she “lacked” fire and the hunger to win.

6. It was a defiant Paxton who come in at the tail end to execute Beyoncé’s Listen and closed off Sunday’s show with Just The Way You Are by Bruno Mars. Her father was left sobbing. Unathi said she was “left speechless” with the first song and hoped the teen understood “just how amazing” she is. Randall finished it off with: “I think you’re the only girl who can go up against these guys.”

READ: Unathi Msenga’s album “Nguwe” sells out in less than a week

So, who took the crown and who is in danger, according to the judges?

“Paxton was the best and Phindy is at the bottom,” said Somizi.

“Paxton and Mthokozisi are my joint winners for this round, and Faith is in danger,” intoned Unathi.

“Mthokozisi looks like he’s already won, and Phindy didn’t do anything for me,” was Randall’s opinion.

Don’t forget to vote for your favourite.