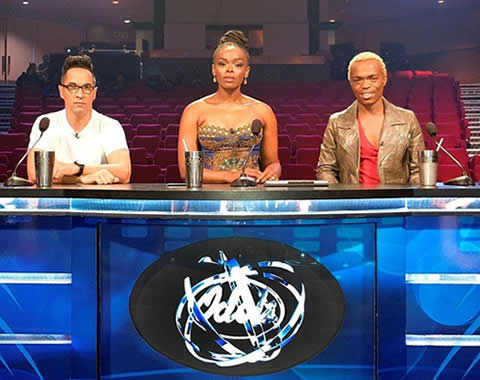 Season XIII is set to be an epic battle of powerful vocals, star quality, and sheer charisma. Theatre Week saw to it that only the most tenacious of talents made it to the coveted Top 16, because as expected, it was anything but easy getting here.

By the end of the first day, excitement had turned to apprehension as things got very real very quickly for the eager amateur singers. Nearly 30 contestants were sent home before they could even unpack their toothbrushes.

This left 48 anxious but determined candidates to battle it out in the Group Stage. Groups were tasked with being innovative with their interpretations of songs, and as a winning group was chosen, the rest were left holding their breath as they awaited critique from the judges. And Randall Abrahams, Unathi Msengana and Somizi Mhlongo were not playing games; they wanted quality.

Twenty people were cut in the ‘Group Stage’, leaving 28 to fight in the ‘Solo Stage’. They could see the spotlight within reach, and had to rely on their talent, discipline and nerves of steel to bag a spot in the Top 16. Accompanied by percussions, piano and guitar, the contestants gave their all on the stage, watched by an enthusiastic audience and cheered on by family, friends and strangers.

As expected, some thrived while others buckled under the pressure forgetting lyrics. The judges were having none of that.

“After all these years of watching Idols, you should know by now that it’s unforgivable to forget your lyrics! It’s disrespectful to us the judges, the people watching at home and to this audience. It’s simply unacceptable,” admonished an irate Unathi.

Songs choices ranged from contemporary Afropop hits like Lira’s “Ngiyazifela” and Musa’s “Mthande”, to R&B favourites “Vision of Love” by Mariah Carey, and “No More Drama” by Mary J Blige. Pop favourites such as Rihanna’s “Man Down” and Jennifer Hudson’s “Spotlight” also made the cut. The contestants gave their best interpretations and received a lot of love from the auditorium audience.

Comments from the judges were a mixed bag, with them praising some contestants for being flawless while others left them underwhelmed and a few did not move them at all.

Later this year, one of them will be crowned the ultimate winner of Idols SA Season XIII. Who will that be? Stay tuned and be part of this unforgettable journey that will change somebody’s life forever.