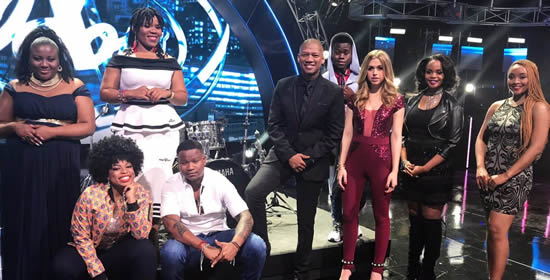 Entertainment galore on our live stage.

First off was Minnie, who received appreciative feedback from the judges for her rendition of Brenda Fassie’s Vul’indlela. “I’ve never heard Vul’indlela sung in such a soulful way before,” said Unathi. Randall felt Minnie’s personality would set her apart, while Somizi gave her his first “whoo shem!”

Botlhale followed with I Can’t Feel My Face by The Weeknd, which was praised by Randall but criticised by Somizi. “I felt like we were at a varsity beauty pageant,” he said.

Zahara’s Umthwalo earned Basetsana high praise. “Flawless!” announced Somizi. Randall and Unathi commended her on a strong quality of voice, but cautioned against the lack of connection with the audience.

Hadassah’s rendition of Golden by Jill Scott received arguably the evening’s grimmest outlook when Randall said he doubted she would make the Top 10, Unathi felt she was not quite present and Somizi became “lost”.

Gabi came on with Tori Kelly’s Nobody Love. Randall predicted her personality will keep her on the show. Unathi called it her best performance yet, but for Somizi everything had gone South from the go.

The loudest and longest applause went to Mthokozisi, whose swoon-worthy vocal of Joe’s I Wanna Know had Unathi preening, Randall predicting he will go far and Somizi declaring that he’s got “that thing”.

It was followed by an equally goosebumps-inducing performance by Thapelo, who gave her all with Tamar Braxton’s Love & War. “You killed that song,” was Somizi’s assertion, while Randall and Unathi foresaw her future in the Top 10.

Tee closed the show with Kelly Khumalo’s Qinisela, which saw Somizi rave about her “showmanship”. Randall said people will remember her, and Unathi called it “amazing!”.

Lady Zamar, who recently performed at the DStv Mzansi Viewers’ Choice Awards, was the night’s entertainment with her house hits Love Is Blind and My Baby.

But all eyes are on the big prize – the Top 10. Which six will get the big chop and who will remain for Idols Season 13 Top 10? Tune in next week!